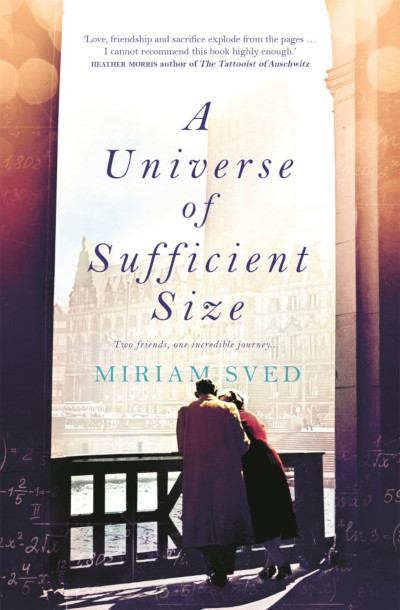 A Universe of Sufficient Size

I have wished so many times that I had acted differently.
I wish that I had been more worthy of you…
Eventually the war will end, and then we will find each other.

Until then, remember me.

Budapest, 1938. In a city park, beneath a bleakly looming statue, five Jewish mathematicians gather to share ideas, trade proofs and whisper sedition. Expelled from the university and persecuted by the state’s laws, they live in an uneasy but not unhappy bubble of work, friendship and slim plans of escape.

Sydney, 2007. Illy has just buried her father, a violent, unpredictable man whose bitterness she never understood. And now, the day after his funeral, Illy’s mother has gifted her a curious notebook. Its faded pages are a mix of personal stories and mathematical discovery, all recounted by a young woman seemingly blind to Europe’s coming storm. A woman very different to the mother and grandmother everyone thought they knew.

Inspired by a true story, Miriam Sved’s beautifully crafted novel charts a course through both the light and dark of human relationships: a vivid recreation of Hungary before German occupation, a decades-old mystery locked in the histories of five students, and a story about the selfless power of love, even years and worlds apart.

Out now with Picador. Purchase A Universe of Sufficient Size here.

SHORTLISTED FOR THE COLIN RODERICK AWARD 2020

PRAISE FOR A UNIVERSE OF SUFFICIENT SIZE

‘This tale of five young student mathematicians in pre-war Budapest is one of the most convincing and impressive novels about the life of the mind that I have ever seen written in Australia. Its immediate concerns are gripping and dramatic, for the year is 1938 and the five friends are Jewish. And only one of them, it seems, can see clearly what is coming. The story toggles between the Hungary of 1938 and the Sydney of 2007, where one of the five, now an old woman, has just been widowed and has moved in with her only daughter. But then the only other surviving member of the group, a brilliant and now internationally famous mathematician, comes on a university visit and the friends are reunited for the first time in more than 50 years. This is a novel about youth and maths: about friendship, family, hopeless love, intellectual passions, and the long, long shadow of World War II.’

Kerryn Goldsworthy in The Age and The Sydney Morning Herald

‘A Universe of Sufficient Size is plotted with the precision of a complex Venn diagram, with overlapping identities, intersecting storylines, narrative arcs, and psychological circles that eventually resolve themselves into a poignant and breathtaking denouement.’

Mandy Sayer in The Australian

‘If ever there is a novel you should not miss, this is it. 5 stars’