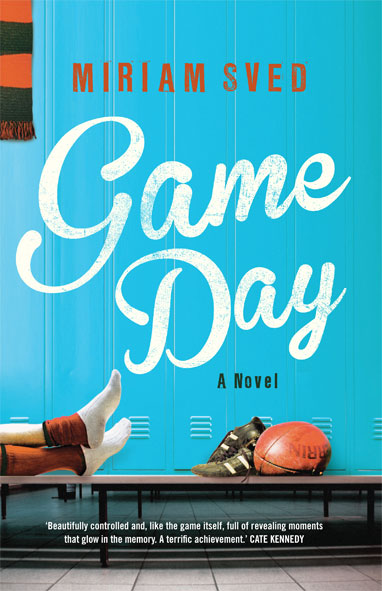 ‘The ruckmen face off over the centre circle and for a moment everything is frozen possibility: players, umpire, the ball suspended overhead, the softly clouded sky. Everything except the fans, a circus beyond the stillness. Then the ball swings down and cracks it all open.’

The new draft pick, the tired has-been, the up-and-comer, the might-have-been. The talent scout, the coach on the edge, the beleaguered umpire, the concerned medic. The number-one fan, the lifetime members, the desperate gamblers. The footballers’ mums, the WAGs, the groupies. The tags, the rivals, the sledging. The pressure.

Mick Reece and Jake Dooley, best mates since childhood, begin their first professional season playing AFL with little notion of what they’re getting into: the complexity of the beast that the game must feed.

In Game Day, Miriam Sved brings this beast into the light over the course of one season of Aussie Rules. What unfolds is a deeply insightful novel about the pathology of an AFL club, its players and its fans. Revelling in their battles, their victories and their relentless interdependence, Game Day asks whether what unites the true believers is stronger than what divides them, and if love of the game can transcend our flaws and imperfections to result in something beautiful.

‘Miriam Sved’s Game Day is an absolute corker, leaping into the ruck of AFL religion in a muscular, steely-eyed and dramatic way that will appeal to devotees and heretics alike… It’s a gripping read that doesn’t flinch from the ugliness and imperfection of the professional sport in the 21st century, yet succeeds, too, in capturing its miraculous aspect, the epic physical poetry of Aussie rules that makes it so much more than a game to so many. It’s the most supple, lively literary take on AFL I’ve read.’